IT CAME FROM THE STREETS VOLUME 7 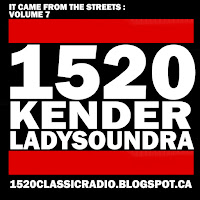 IT CAME FROM THE STREETS VOLUME 7

Hey everyone out there in Hip-Hop land, here is our latest installment of "IT CAME FROM THE STREETS", the section where "WE PLAY WHAT YOU SAY".  If you like the freshest and newest cuts, then this is for you.

Send us your music to 1520ClassicRadio@gmail.com and though we cannot gaurentee airtime, we will guarantee that you will have LadySoundRa and KendeR's ears with each submission!


You can also send to our 1520 Classic Radio Twitter!

Yes, we personally taste test each submission for flavor, heat and of course that secret ingredient that stands out from the rest.

So what a jam packed show we have for you!  Press Play to hear it NOW!

Hailing from Los Angeles, California, Bartenderz is a music collective including members Lavell Streets and Jay Barzz. The organic fusion of sound between the two showcase the limitless bounds they have in literary skill, wordplay and overall style as they embody the sense of true lyricism and overall fun.  They send via Twitter "Slow Start".

Some blame it on the Rain (Ahem, LadySoundRa) and others "Blame Rap".  Chris J from Corpus Christi Texas sends this P.Soul produced opus via Twitter.

Captain Crook from Lund, Sweden sends us "Not Alone", sent to us via Twitter.

No stranger to the show, ThaGodFahim sends us "Crocodile Smiles".  Be sure to check this Chicago/Atlanta artists album "Shadows of Nazareth".

Bishop Nehru brings us a HUGE track with "Bishy in Japan 16 (Knowing Nothing)" from Rockland New York.  This was sent to us via Twitter.

Jumping the pond over to the UKm  MusB & ClaimThaThrone AKA THE COMMODITY ask us to "Lay Low" - sent to us via Twitter.

Sonic terrorism is the union of Zahori and Lns.  They mix an elegant and aggressive union of hip hop
Recorded at Studio 90 under the command of Lns . The song is called Del Papi Al Estudio

In a Voltron esque fashion...M-Dot and the EMS team assemble a single for 'Jake LaDOTTA' (out now)

Nyck Caution warns us about "World In Your Pocket" ft. Joey Bada$ Prod. by Chuck Strangers from Brooklyn New York.

Quincy Steel from Highland Falls asks "Why", sent to us via Instagram.

Smart Is The New Gangsta by RapStarr produced Anno Domini Beats was originally sent to us via Twitter, asking us to vote and big up this song for Coast 2 Coast Live, Pittsburgh Edition - Good Luck!

From the album "Shadows of Nazareth", ThaGodFahim brings us "Reaper Code", produced by V.I.C. Mike Heron.

That "Foul Mouth Jerk" has been elected the "New Sheriff In Town".  Hear this track from the album "Death by Misadventure, from New Jersey.

Noah-O & Kleph Dollaz asks us too look through the "Peep Hole".  These Richmond Virginia natives  sends this track from "All Souled Out" as an homage to Pete Rock & CL Smooth.  Also, they send us Beats x Rhymes x Life from the same album.

LISTEN LIVE EVERY SATURDAY NIGHT ON FUSIONRADIO.CA 10PM FOR ALL THE NEWEST AND GREATEST HIP-HOP THAT YOU SEND TO US!
MAYBE YOU WILL GET ON AIR!  BOOM!